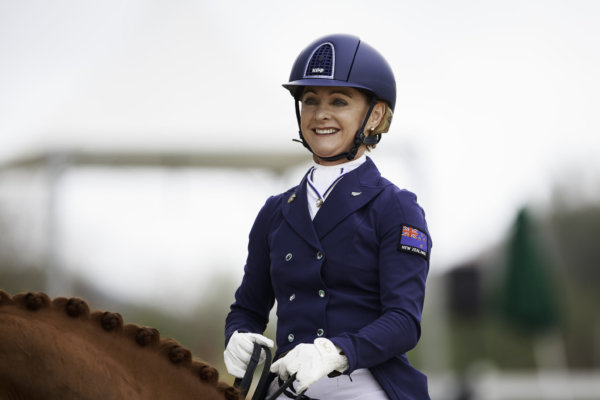 Julie Brougham is ecstatic after Vom Feinsten produced possibly the best two tests of his life at the CDI at Saugerties at the weekend. The Kiwi combo scored 70.277% for their Grand Prix Special and 69.609% for their Grand Prix, in front of a top quality line of international judges.

“He was just super,” says Julie. “He had a fantastic show. He was settled and well behaved and didn’t put a foot wrong in the two tests – and he hasn’t competed since April. I think I was a bit more relaxed with the second test. When Steiny is relaxed, he does it very well.”

Julie was particularly pleased with the marks from the international judges. “Just 1% covered them all – four had Steiny over 70% and the other had him on 69.787% so that was all very close.”

She was disappointed for the organisers that the CDI had not been better supported by competitors. “I would love to attend another event before the Games as I do enjoy the competing and it is nice to have that pressure on you. I think that pressure improves you.”

Julie and her team will remain at Avalon Farm on the New York Connecticut border until the end of the month.

However, the news wasn’t so exciting for John Thompson and JHT Antonello who withdrew from the Special after a Grand Prix score not up to their usual mark and being “not quite right” the following day. John and his team now en route to Sharn Wordley’s base in Kentucky where Antonello will be fully checked out.

Dressage chef d’equipe Wendy Hamerton said it was obviously very dispiriting at this stage of the campaign for John and his number one supporter and fiancé Holly Leach.

“Although AJ warmed up well and scored good marks in many movements, John didn’t feel he was just quite right and chose to withdraw him before the Special,” she said.

“This of course was a huge disappointment for John, but he and Holly were proud to stay and support Team Brougham, cheering them on for another good score. AJ will be monitored closely by a team of veterinary experts over the next few days and we all hope for a positive result.”